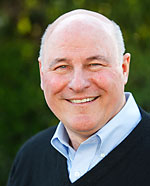 Scott Johnson, who has been living with multiple sclerosis for over 41 years, is using his acumen as a business consultant and serial entrepreneur to reform the current system for medical research and drug development that has failed to produce new patient treatments for millions living with chronic and debilitating diseases.

Featured in Fortune (September 2006) as a “lifesaving shakeup in the world of medical research”, Scott’s big idea has since delivered on that promise by (1) proving that basic science can be accelerated and (2) creating connections between academic scientists and those who commercially develop drugs. This will mean the faster development and delivery of patient treatments and cures.

The results of MRF’s Accelerated Research Collaboration™ model (ARC™) have been nothing short of extraordinary. Since its founding, the Myelin Repair Foundation-funded scientific collaboration has (1) identified over 100 novel potential targets; (2) developed many new research tools with broad application to all neurological disease research; (3) received seven U.S. patents and (4) published more than 120 scientific articles in peer-reviewed journals. To date, MRF raised over $60 million from 30 countries around the world from individuals and foundations interested in multiple sclerosis and / or the broad applicability of MRF’s ARC model. Furthermore, more than 70 different disease-specific research organizations have expressed an interest in the model and how it might be used to leverage their own research investments.

Without pointing fingers, Scott explains how the current system for medical research and developing new drugs is failing to deliver patient treatments. His talks are inspirational for all patients and others with an interest in systemic change in complicated and archaic systems. His remarks are thoughtful and provocative.

He has spoken broadly on this topic at the National Cancer Institute, the 12Gurus/NextGen Health conference, NASA, BIL/PIL, the Aspen Institute Health Forum and others. His ideas have been covered in the Wall Street Journal, Forbes, New York Times, Fast Company, The Atlantic, Newsweek, Businessweek, the San Francisco Chronicle and more. In 2006, he was named as one of Scientific American’s top 50 worldwide for business, science and policy leadership. In addition, Scott was recognized as the Northern California Ernst & Young Entrepreneur Of The Year® in the Social Entrepreneurship category in 2010. He was the recipient of the 2009 NMSS Dorothy Corwin Spirit of Life Award, Research!America’s 2012 Gordon and Llura Gund Leadership Award, and the 2013 BayBio Pantheon DiNA Award.

The Myelin Repair Foundation is identifying biomarkers to help accelerate myelin repair treatments. Learn more about the importance of biomarkers and the role they play in getting treatments to patients.